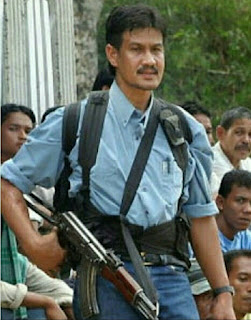 gaespost.com | BANDA ACEH  – Do you remember September 8, 2004 or to be precise 17 years ago, a day of mourning for the people of Aceh, especially the fighters of the Free Aceh Movement (GAM). The reason is that one of the highest leaders of GAM, Tgk Ishak Daud was killed in a battle with the TNI in the Babah Krueng area, East Peureulak, East Aceh.

Abusyik, the deceased’s nickname, along with 11 of his loyal bodyguards, was martyred in a great and open battle. in that incident, his wife Cut Rostina was also martyred together in the final battle.

The news of the martyrdom of the GAM Commander in the Peureulak area then became the public spotlight. Since that incident, GAM has been grieving. To commemorate the martyrdom of Ishak Daud, GAM troops raised the Bintang Bulan flag at half-mast.

In the ranks of GAM’s struggle, Ishak Daud was known as a commander who was highly respected and respected. Armed with knowledge of military training in Libya, the figure of Ishak Daud is known to have a wealth of experience and knowledge of guerrillas in the wilderness of the interior of East Aceh.

In GAM circles, this handsome and tall man is called “abusyik (grandfather)”. the name was deliberately pinned to him as a figure who was elder and respected by his subordinates.

Even though he is guerrilla in the forest, Ishak Daud is known for a neat and dapper appearance. Wherever he is, he often carries an AK 47 weapon and an FN type pistol tucked in his waist.

ishak was born in Blang Geulumpang Village, Idi Rayeuk District, East Aceh on January 12, 1960. He is the first child of Muhammad Daud bin Tengku Basyah and Nuriah. As a child, Ishak lived in a village environment where the average life was below the poverty line.

his father works as a fisherman, while his mother sells cakes. Ishak Daud was never satisfied with this condition, in early 1984, when he was 24 years old, Ishak decided to migrate to Malaysia.

in the neighboring country, Ishak Daud worked haphazardly, as a construction worker or a restaurant keeper. Because he could not stand living like that in Malaysia, Ishak Daud decided to migrate to Singapore. Moreover, there are many Acehnese in that country. just like in Malaysia, Ishak Daud also works odd jobs, from construction workers to transportation drivers. It was also in Singapore that Ishak Daud became acquainted with the Free Aceh Movement, especially at that time many Free Aceh activists held political meetings.

Practically, while working in Singapore Isaac often attended these meetings. This also opened his insight into the history of Aceh. In June 1987, Ishak was finally sworn in by Teungku Abdullah Musa as a member of GAM.

After returning from Libya, Ishak Daud stopped in Singapore for 12 days. he also decided to return to Aceh via Tanjung Balai Harbor. From there he took a bus and returned to his hometown in Idi Rayeuk.

Initially he worked as a fish trader and secretly recruited youths to get involved with GAM. Ishak was one of the first figures to raise the Free Aceh flag at Idi Rayeuk High School, East Aceh on December 4, 1989, after Hasan Tiro raised the flag on Mount Halimun, Pidie on December 4, 1976.

according to Umar, the deceased was known as a firm figure and had a high commitment. Umar was a loyal bodyguard of the most famous commander in the era of the 2000s.

***This article is quoted from various sources