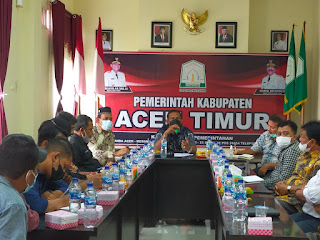 gaespost.com | ACEH TIMUR – The Sumatran Rhino Sanctuary (SRS) program which has been established in East Aceh Regency continues, the construction of the Sumatran Rhino breeding site is planned to start soon this year.

The construction of the rhino sanctuary is part of an emergency action plan to save the Sumatran rhino from the enclave of a population that is no longer viable, and whose population and habitat have been isolated, in the forest area of ​​Aceh.

East Aceh Regent H. Hasballah Bin H.M. Thaib, SH fully supports the construction of the SRS as an effort to save the Sumatran rhino, whose natural population is no more than 80 individuals.

If the third rhino breeding site in Indonesia is completed in the Simpang Jernih District, East Aceh, it is believed that a multiplier effect will be created in the tourism sector.

Rocky, who is familiarly called the Regent of East Aceh, also believes that, apart from being a protected area for nature and wildlife conservation, this rhino breeding location will also become a new conservation tourism destination in East Aceh.

“This is a very good prospect for the economy of the people in Simpang Jernih. Our animals can be well preserved, the community’s economy will also be awakened and a multiplier effect will be created in the tourism sector,” said Rocky.

rocky also invited the local community to support and assist in realizing the presence of this Sumatran rhino sanctuary in East Aceh, which only has three locations in Indonesia, after East Kalimantan and Lampung.

in a meeting attended by Assistants, heads of relevant OPD, Lauder Conservation Forum (FKL), Simpang Jernih sub-district head, Rantau Panjang village head and community representatives, on Thursday (9/9/2021), in the Hall of the Regional Secretariat of Aceh Timur, Regent Rocky also explained the progress that has been achieved byother areas where the Sumatran rhino is in captivity.

According to him, the Government of East Aceh is not only determined to save protected animals, but will also build the economy of the people in this area, besides that it also saves the forests of East Aceh so that no one destroys the nature of the area.

“The natural potential at Simpang Jernih is extraordinary, there are waterfalls, the forest and nature are very beautiful, besides that the river water is also clear with high-value jurung fish, so we have to save it all,” he concluded.

If there is a third party that can hinder progress at Simpang Jernih Rocky will deal with it, according to the Regent, a former GAM combatant, Simpang Jernih with all the great potential it has should be able to become a developed tourist area in the future.

“We want to build good road access, the community’s economy must also rise, the tourism sector can grow in the future with this SRS program,” hoped Rocky.