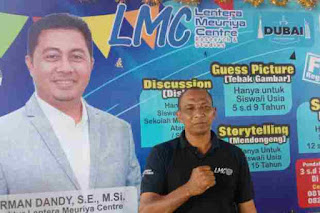 gaespost.com | ACEH TIMUR – The 2022 English Festival, which was held by the Lentera Meuriya Center (LMC) for 3 days at Dubai Coffee Idi Rayeuk, became a matter of pride for Alwi Yani Ibrahim. .because his long-held obsessions and dreams have now come true.

At the opening session of the English Festival on Saturday 29/01, Mr. Yani expressed his deep feelings in front of the participants, visitors and guests.

.”Since 2012 opened a private English locale, only Firman Dandy and LMC are the only ones who support and support me,” said Mr. Yani while wiping tears with emotion.

.his conversation had stopped for a few seconds, because he could not say a word, while holding back his emotion,

“My obsession and dream to hold an English language competition has now come true thanks to the support of Firman Dandy and LMC,” said the Founder of Local Private Alwi English School.

.since receiving participant registration until the 2-day English Festival 2022, the man who has lived in Australia for several years, seems so enthusiastic and working hard to make the event that was first held in East Aceh Regency a success.

.”I didn’t think that East Aceh had so many potential and accomplished children, especially mastering English,” said Mr Yani, who is also the Secretary of the SC English Festival 2022.

.it can be seen from the enthusiasm and the number of participants who registered reached 200 participants, this is extraordinary, said the tall black man.

“This idea came up spontaneously when I saw the children under Mr Yani’s care performing rehearsals in public spaces.

.From there, I saw that many children have potential and are creative, so it is very important to hold an event to channel talent through events, while quoting Imam Al-Ghazali’s message, to educate people, one must change through the environment,” said Firman Dandy.

.”The mindset so far is like the words buya krueng teudong dong, buya tamong meuraseuki, from now on we have to change it to “buya krueng must be tapeucarong, then buya krueng will have integrity and meuseuki, but the key is through science,” concluded Firman Dandy.[] (Zal)..